The way we talk about forgiveness leaves victims of abuse feeling like they have something to apologize for, even though it’s really the other way around.

The Christian community is particularly bad about this. I can’t count the number of stories I’ve read about people who were abused by religious authority figures or family members and were just told to “forgive” when they reported it.

I’ve had a former friend tell me I shouldn’t hold her actions against her, because at the time I was trying to be Christian and “Christianity is big on forgiveness.”

It’s true that ‘Christianity is big on forgiveness’ (like most religions are) but that doesn’t mean it’s easy to do. Nor is it ever said that it’s easy. The whole point about Christianity is to try to master the bad traits that are part of human nature. Wrath is one of the seven deadly sins because, like the other six, it’s so common in human nature.

Just because you know what you should do doesn’t mean that most people are successful at it; you just have to keep trying. With practice and intentionality, you can get better at it, but it’s rarely instantaneous just because you’re trying.

And all too often, the urging toward forgiveness is used as a way to justify our own mistreatment by others. 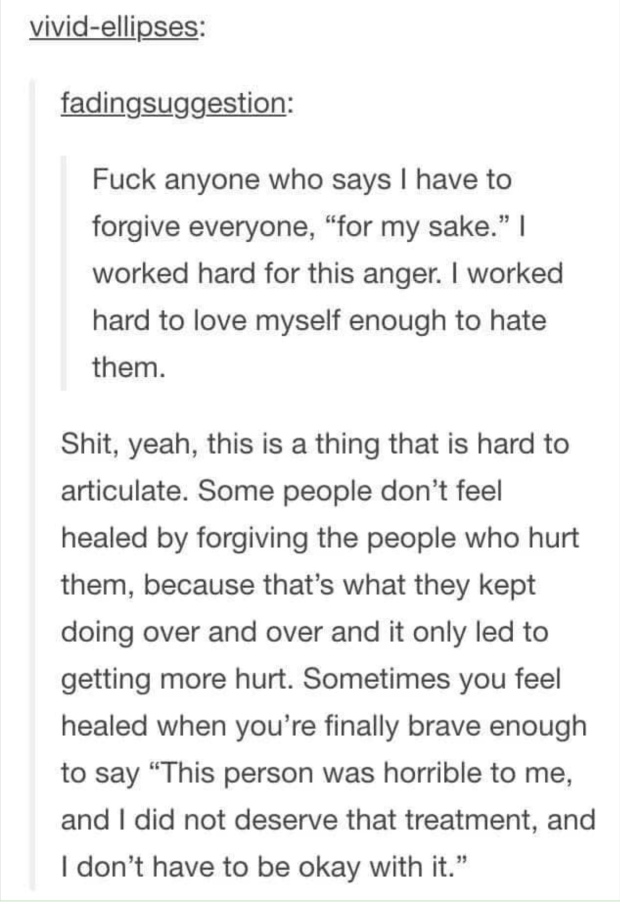 I’ve also seen in a lot of places that you should forgive because it will bring you peace, not as an act of mercy towards others. And that’s true to an extent: we are often harmed by our lack of forgiveness more than the perpetrator is. They don’t really deserve our forgiveness either way but they are not usually hurt by our lack of it. A lot of times we are the ones hurt by holding on to pain.

But when the pain is caused by what someone did to you, you’re going to feel that pain until you work through it and there’s no timetable for when that should occur. You can’t “just get over it” and it’s inherently dismissive if someone says you should.

You can’t just will yourself into not feeling hurt anymore simply because you’re supposed to forgive. You are under no obligation to “be the bigger person” when someone repeatedly hurts you.

Even in cases where the perpetrator is hurt by our failure to forgive them (such as in the case of abusive families), they are rarely hurt enough to change their abusive behaviors. And that’s what’s really at the root of being unforgiving.

It’s human nature that forgiveness is hard. But I can say from experience that it’s a lot easier to forgive someone who actually gets it and knows what they’ve done wrong and is truly apologetic. Yet it requires more than just an acknowledgement and apology to be able to forgive. What’s really needed is action behind the apology in the form of truly changed behavior.

In my experience, people rarely change without pain. If people are pained enough by their own behavior and how it affects people, damn right they are going to be motivated enough to change. And once they have that realization and make those changes, it will be noticeable.

You have no obligation to forgive people who aren’t sorry, who keep doing the same things over and over to you even after you tell them how hurtful you find it. Sometimes the call to forgiveness is just used to justify abuse. The problem isn’t what I did but your reaction to it.

It’s a lot harder to forgive someone who doesn’t seem to be truly sorry. Qualified apologies, retracted apologies, half-assed apologies don’t count. If someone says “I’m truly sorry, I mean it” but a few minutes later says “you’re blessed if what I did was the worst thing anyone’s ever done to you,” that’s a half-assed apology that doesn’t sound like an apology. It sounds like you’re saying the words you’re supposed to say, then taking them back by minimizing what you did. Or “I’m sorry if you were hurt by what I said”–just stop after the first two words, because that if undoes the beginning.

It took me a really long time to realize that it was okay to be angry. Even if I can get to a point of genuine forgiveness without receiving a genuine apology, I don’t owe it to anybody.

Like the image I posted above, anger was waiting on the other side for me once I started to believe that I deserved better. I wouldn’t say that I hated the people who hurt me because that’s not who I am, but that doesn’t mean I could forgive just because I was supposed to. Once I truly believed that I was worthy of love and being treated well, I suddenly felt that I really didn’t deserve how badly I’d been treated.

Sometimes anger is a necessary stop on the way to forgiveness. Nobody talks about that part; they only talk about the virtues of forgiveness. Being angry at how you’ve allowed yourself to be treated is an important step in learning to love yourself and have healthy relationships.