I had the MRI of my brain today. It was the first time I got kinda panicky with an MRI. I was already on the table in position, with earplugs in and headphones over that, when the tech couldn’t find my veins to start an IV for the contrast.

The tech poked me twice and missed my vein both times. She called in a colleague and he put it in my hand. I really hate that. I can get tattoos no problem but veins I am just not okay with.

But anyway. When she stuck me the second time, I started hyperventilating and asked her to take off the headphones because I couldn’t breathe well. First time I’ve ever freaked out like that. But I know lots of people get claustrophobic in MRI machines, so that’s ultimately no big deal. 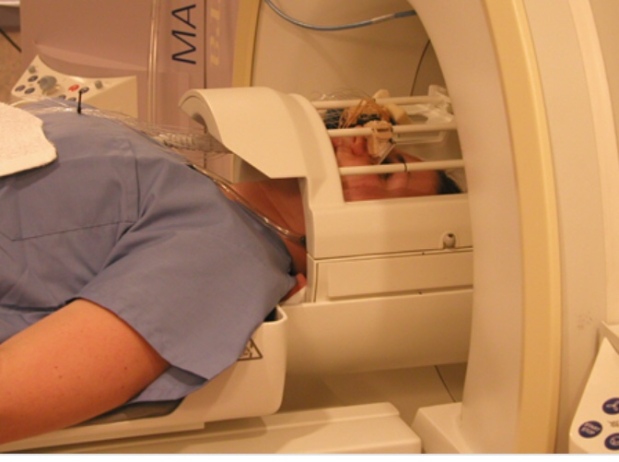 It’s not freaky at all to have that cage over your head and be slid into a tube where you’ll hear super loud noises for a half-hour, no not at all…

So when I was done with the MRI, the tech knocked on the door of the locker room where I was putting all my jewelry back on. She asked if I was having symptoms now and looked very concerned.

I told her I felt like I’d been in one long relapse since June and she asked what my specific symptoms were. I said they were mostly cognitive: frequent panic and disorientation, short-term memory loss and nearly no working memory.

She asked when I was seeing the neurologist again and I said not until April. She said I might need to get in sooner.

Yeah, that rattled me a lot. No MRI technician has ever reacted that way before. Maybe she was new and just hadn’t seen an MRI like mine before — her trouble with the IV points to that theory.

The radiologist won’t finish his interpretations until next Monday. He’ll send a copy to my neurologist but I can (and will) go pick up a copy of the same report he sends to the neurologist for myself.

But they gave me a disc of the images today and just comparing it to my last MRI in August 2015, it’s much worse. My last MRI was about 18 months ago, when I was hospitalized with my worst relapse ever.

That MRI looked virtually unchanged from my first one that diagnosed me with MS in 2013. I honestly expected the same this time.

I’ve studied MRIs enough that while I definitely don’t know as much as a trained person who works in radiology, I know far more than the average layperson.

Hell, even my husband could tell the difference. I had a disc from a 2015 MRI here and contrasted it to the one today and the differences were super obvious that I was much worse now.

It didn’t look anything like my old MRIs at all, almost like not even the same brain. All the MRIs between 2013-2017 looked similar. Not this one.

The parts of my brain that appear to be damaged also have to do with left-right confusion and spatial awareness. That correlates with what the neuropsych found the other day during my exam, too. One of the tests he did in had me blindfolded and required me to put blocks of various shapes into corresponding openings. I had to identify the shapes and feel on the board for one that matched. It was really hard for me.

I don’t know if any of this will help my disability case at all. But it’s definitely vindicating to have both an 8-hour neuropsych evaluation and an MRI say roughly the same thing.

I knew I had gotten a lot worse. I knew it was weird and unusual that I just couldn’t seem to recover. And now I have lots of proof that it wasn’t all in my imagination.

That doesn’t make me any less depressed, but at least it’s sort of an answer and that helps a bit.